26 abril 2010
Deborah van Gasteren is a member of the Jobe slalom team of the Netherlands since 2003. This 19 year old girl is very talented and always willing to progress her skills in skiing. Besides her skiing career she is also following a full time Business Administration study at the Erasmus University in Rotterdam, busy girl.

Because of the fact, Deborah is such an interesting and motivated person Jobe had a interview with her and did not want to withhold you of the results.

JOBE: Hello Deborah, Could you please introduce yourself?
DvG: Hey! My full name is Deborah van Gasteren. I’m 19 years old, and live close to Rotterdam (The Netherlands). I have been a member of the Jobe slalom team since 2003. I am active in slalom skiing, trick skiing, and jumping (over a ramp). Although I really like to do them all, slalom skiing is my favorite event!

JOBE: I know that you’ve been riding for a long time, but how and when did you start out?
DvG: My first experience with waterskiing was a long time ago: When I was about 3 years old, my dad went waterskiing, while carrying me with him on one arm. I think this made a big impression, since I can still remember it! I was 7 years old when I did the first time waterskiing myself behind the boat (with a long rope), and when I was 12 years old I did my first competition.

JOBE: What does skiing mean to you?
DvG: It is just the nicest sport to do! Although I really like a lot of sports, nothing could beat waterskiing so far. Actually, waterskiing is more than just doing sports. Throughout the years I have met so many people, and travelled and learned a lot.

JOBE: How often do you train during the season? And is there a person you usually ride with?
DvG: During the summer holidays I train almost everyday. Most of the time you can find me on the water early in the morning then (around 8/9 am). This may sound kind of crazy, but if I want to be able to train properly, I have to: later on the day there are usually lots of boats on the water, causing waves.
During the off-season I often do taekwondo, go to the gym, and now and then I play quash.
The person that joins me very often is my dad. Most of the time, he is the one driving the boat. Often, I train together with some fanatics from the same ski club.

JOBE: What motivates you to progress in skiing?
DvG: The nice thing about waterskiing is that it’s never the same. There is always something that you can improve or a new trick/technique you can learn. Besides, the circumstances on the water vary a lot (smooth water vs. water with waves; wind vs. no wind for example), which make almost every training session a bit different.

JOBE: You are a girl who definitely thinks about her future, so what are you plans for the water sports season of 2010? DvG: The most important thing is having fun on the water with nice people around me! Besides, I hope to improve my skiing skills and I’m planning to participate in competitions this year as well of course (for instance the Dutch Championships, and the International Bremerhaven Competition in Germany).

JOBE: You are studying at a university right? What study do you follow?
DvG: Indeed, I’m currently a 2nd year Bachelor student in International Business Administration at Erasmus University in The Netherlands. So far it is going well, and fortunately it is possible to combine my study with waterskiing and other activities.

JOBE: What do you want to do after finishing your study on the university?
DvG: That’s an easy question, but kind of hard to answer: I’m currently figuring out what Master program I want to follow after getting my Bachelor degree. After that it is time for a real job I think, and what that job is going to be…we will see what the future brings!

JOBE: You live in Rotterdam which is a big and popular city in the Netherlands where you can party a lot. Do you often go out with your friends in Rotterdam?
DvG: During summer I usually don’t party a lot because of the waterskiing. Partying the whole night won’t make my early training sessions a success I guess…During the off-season it’s a different story of course. Besides Rotterdam, Utrecht is 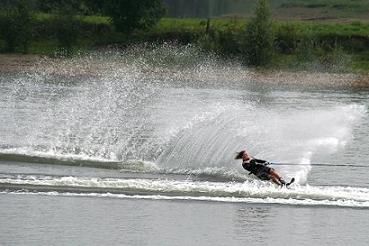 also a good place to be when it comes to partying.

JOBE: You’ve had a couple of photo shoots for the Jobe catalogue. What is your experience with that?
DvG: I enjoyed doing that, especially because of the good working ambiance during the photo shoots! As a company, promoting your product is an important aspect of course, and it has been a pleasure to contribute a bit to that.

JOBE: Thanks for your time Deborah! Want to add something to the interview?
DvG: You’re welcome; it was a pleasure do to. I would like to grasp this opportunity to thank my sponsors, my parents, and all other persons that have been supporting me throughout the years.