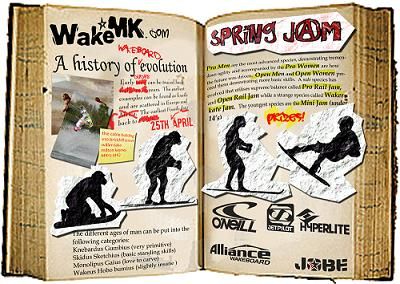 The beginning of the 2010 UK wakeboard season is looming and on Sunday April 25th, WakeMK is hosting the first competition on the UK calendar – Spring Jam. Jobe will be an official sponsor of this event.

The WakeMK Jam competition is set aside from every other cable event because of its relaxed format. It allows an hour long jam session for riders to showcase their trick list and push themselves to try new tricks in order to qualify for the final. The event is based around 8 categories of various abilities which means anyone from established riders to pros can enter and have a chance at winning a pot of money. This year will be the second year that we run Spring Jam as a season opener for the UK cable scene and it will be attended by the GB team talent spotters for 2010 team selection.

Jobe is looking forward to see you on the 25th of April.